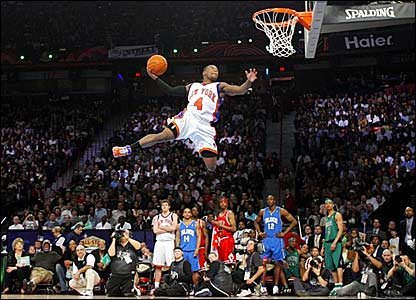 Shootout at Rucker; Nate was there and…(Video)

Nate was in the wrong place at the wrong time, thankfully he is OK.  He played the part of innocent bystander along with a large crowd of people that were sent scurrying as an argument broke out in the stands.  Good to know Nate is ok, our thoughts and prayers go out to those involved.

Five people were shot last night at a basketball game at Harlem’s famed Rucker Park where ex-Knicks guard Nate Robinson was among those scrambling for safety during the chaos, authorities and witnesses said.

The mayhem broke loose just before 11 p.m. at the courts on West 155th Street and Eighth Avenue during the annual Entertainers Basketball Classic, which has featured numerous NBA superstars.
Read more: http://www.nypost.com/p/news/local/manhattan/watch_gunfire_people_shot_after_HdxNrKw9a0JOSH3OISH4tL#ixzz21jpw99Qr