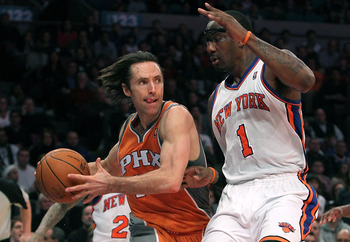 The highly regarded and 2-time MVP met with the Knicks on Sundy to discuss a possible sign-and-trade deal. The deal will bring Nash to the Knicks in exchange for Landry Fields, Toney Douglas, Dan Gadzuric, Jerome Jordan and $3 million in cash. Restricted free agent Fields could be signed to a deal, Douglas has an expiring contract, and the Suns can waive Gadzuric and Jordan. This will clear the Knicks of players that have not lived up to their abilities in NY and bring a proven point guard to teach Jeremy Lin or replace him if Lin does not resign with the Knicks. Nash will also rejoin with Amer’e and might help STAT find his offense.

Free Agents: Lin’s Return Not Guaranteed
Rant: The Knicks and the Draft