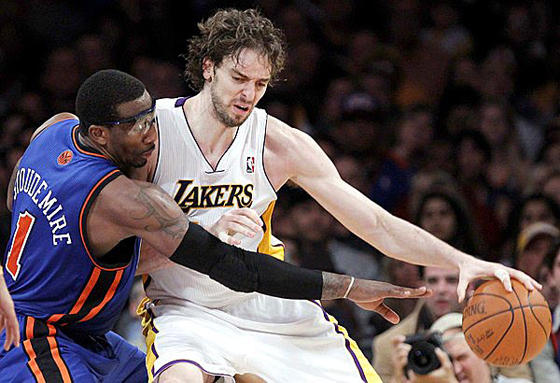 Rant: Just a thought…Amar’e for Gasol?

Not sure of the specifics in contracts but at first glance, I think both teams would benefit.

Gasol spurned by his team at the beginning of the year with the whole CP3 debacle, and the Oil and Water don’t mix back page of the NY newspaper story between Amar’e and Melo.

Pau would be the post presence we so desperately need from our starting PF.  He can play on the perimeter with his 15-18 jump shot, and I don’t care about that “SOFT” tag he wears on his back, I’ve seen the man bang for boards many more times than I have seen Amar’e (Note: I only see Pau play about 4 games all year!)

On the flip side, Amar’e(Robin) can reunite with Batman(Steve Nash) in LA, Amar’e will benefit from Nash running the point and Kobe running the team! Bynum would probably benefit as well, seeing that Amar’e is the dynamic big man that won’t clog the middle.  Bynum you will be on your own in the rebound department, at least you won’t have to share!

I’m going to do some homework and see if the contracts can match.  I forgot to mention, LA owes us one from stealing Steve Nash from our grips!

Amar’e with his significant increase over the 2-3 year period becomes an unmovable object unless the Capologist experts get very creative.  On the surface though this would look like a great exchange.  Both big men would switch big markets (something that is very overlooked) and with a lot to prove I think both would recommit themselves to show they deserve the money they are being paid!