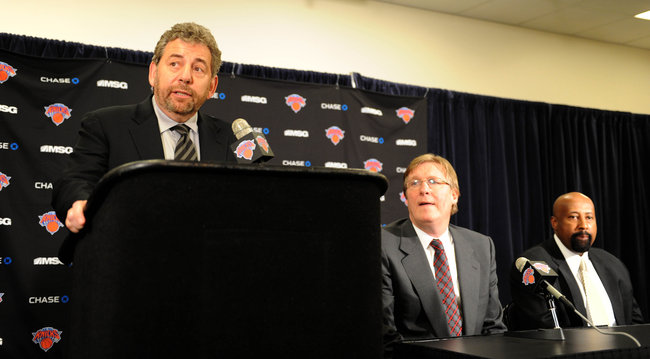 The Knicks wall sheds some light on the Knicks financial situation and does one hell of a job doing it.  I understand all of the scenarios now, and it seems that the Knicks front office knew what they were doing all along.  For a team so strapped with cash and cap space, I think they are working the system to their benefit.  Hopefully all parties involved come to agreements and work things out quickly!  Please click the link and read this article, it will relieve that headache you have.

So, since there is no limit on how many sign-and-trades a team can pull off, the Knicks could use two sign-and-trades, as well as keep their mini-MLE, which would give the Knicks three, roughly $3 million contracts to offer.  One will be going to Kidd, not sure which yet, if Camby decides to join the team, one would go to him, and then the Knicks have one left.

The Knicks could also sign Jason Kidd to the mini-MLE, then combined their two offers into one deal, giving a potential free-agent a starting salary of $7,516,679.5. With this deal, the Knicks can pull themselves closer to a player of OJ Mayo’s caliber, who will demand more than the mini-MLE.  Of course, in this scenario, the Knicks would only be able to offer Marcus Camby the veteran’s minimum, which would likely take them out of the running for the former Knicks big man.

What you thinking about JR?
Novocaine administered to NY Roster