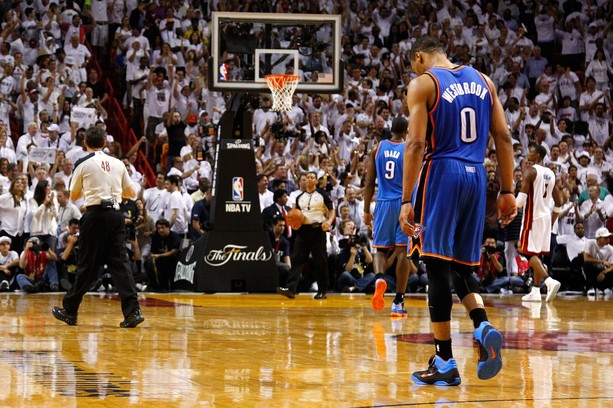 Although Westbrook put on one of the most memorable performances in NBA Finals history, it wasn’t enough as Lebron, Wade and Chalmers…..Yes I said Chalmers was just too much for the Thunder in Game 4.

Westbrook scored 43 points in the loss, but the biggest play came with 13 seconds left but 3.8 seconds left on the Heat’s shot clock.  An ill advised foul by Westbrook, put the icing on the cake for the Heat’s Game 4 win.

Lebron 26pts 12ast & one rebound short of a triple double was determined to finish this game, but late game cramping would keep him sidelined. Chalmers and Wade chipped in with 25 each. Chalmers 12pts came in the 4th quarter and very timely hoops.  Durant supplemented Westbrook’s 43pts with 28pts of his own. Westbrook dropped 17pts and Durant scored 6 in the 4th quarter but that’s all the scoring the Thunder did late.

The Beach Boys are 1 win away from what they promised their fans 2 years ago….can they finish?

Shump Says He’s Out Until January ’13
Jason Kidd wants to back up Lin?