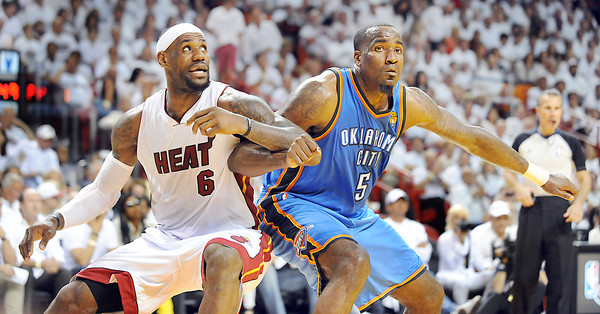 On Sunday, Game 3 of the NBA Finals was played in Miami. On this night, the Thunder did not get off to a slow start as they did in the previous 2 games. What did remain the same as game 2 was the Thunder’s superstar, Kevin Durant (25 Points), foul trouble and being forced to sit in the 3rd. That was when the Heat began to take control of the game. Durant left the game with Thunder up by 10 points allowing Miami to finish the quarter up 2 points. Miami had a strong 4th quarter to finish off the Thunder 91-85. Russell Westbrook finished with 19 points shooting 8-18 from the field. James finished with 29 points and 14 rebounds. Wade added 25 points and Bosh had 10 point with 11 rebounds. The Thunder will have to be more aggressive and Durant will have to avoid getting into foul trouble in game 4 for them to remain in contention for the championship. Game 4 in Miami on Tuesday.