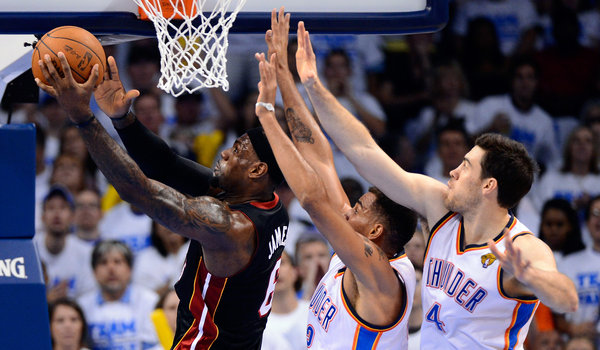 The Miami Heat has just changed the predictions of the NBA finals by winning game 2 against the OKC Thunder on the road. With a lackluster game 1 performance by Dwayne Wade, his improvement in game 2 along with the Heat’s hot start to the game pushed them to a victory. With Wade’s 24 points, LBJ poured in 32 points and Bosh contributed with 16 points and 15 rebounds. Shane Battier was on fire from beyond the 3 point arc, shooting 5-7 from three and dropping 17 points. Miami exploded to a 18-2 lead in the first quarter. The Thunder’s stars, Durant and Westbrook (27 points), had slow starts by getting into early foul trouble. James Harden held the down the team in the first half finishing with 21 points. Though Miami lead throughout the game, Durant, who finished with 32 points, had an opportunity to tie the game in the final seconds but missed the shot and appeared to be fouled by LeBron. With the series tied 1-1 going to Miami, the Thunder will have to steal a game on the Heat’s home floor in order to stay in this series. I’m sure the Thunder will come out in game 3 with focus and intensity. Miami will be sure to match it.

NYK: Vote for Lin/Landry and STAT #NBASMA
The Dream Team’s Only Loss